Champ Landfill is currently in the process of expanding its landfill gas collection and control system.  Work began in early October 2016, and should be complete by mid-December 2016.

Landfill gas is the combination of methane, carbon dioxide, and trace components from the natural decomposition of landfilled waste.  Permitted landfills of a certain size must collect the generated landfill gas and assure destruction by either flaring or beneficial reuse.

Landfill gas collection wells are individually installed in the waste, connected to a piping network, and ultimately feeds a control device to safely destroy landfill gas.  Each individual well is “installed” via two phases: drilling and well installation. 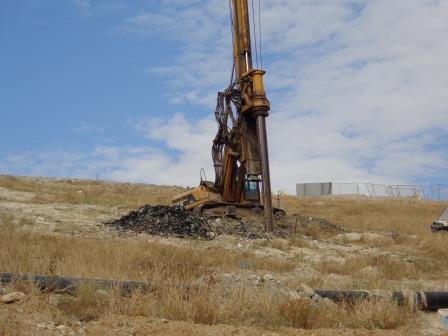 At first, a drilling rig will drill a borehole into the waste mass at predetermined locations.  Each location is surveyed and well depths are recorded to assure designed drill depth is achieved.  Once the design drill depth is reached, a PVC pipe is lowered into the open borehole, with both solid and perforated/slotted sections.

Porous media (generally washed gravel) is then placed into the open borehole around the pipe, and clean soil is used to seal off the new landfill gas well.  A wellhead is then fixed to the PVC pipe, connected to the landfill gas piping network, and the well begins the collection landfill gas for beneficial reuse!

During installation, some odors may be noticeable on and offsite.  Champ Landfill is making every effort to control and contain the amount of nuisance odors.  Using strategic well drilling timing, a safe but aggressive working pace, and perimeter odorants, Champ Landfill wishes a minimal impact to our surrounding communities.

Champ Landfill is committed to serving our neighbors and apologizes for any temporary inconveniences.  Anyone with questions or comments may call 314-291-0087 or complete our contact form.

The News section of the Champs Landfill is designed to keep customers and neighboring communities up-to-date about ongoing and future activities at the landfill.

For example, as the Champ Landfill invests in improvements like the installation of new landfill gas extraction wells, we may anticipate a condition at the landfill that may cause temporary odors.

At these times, we will issue an appropriate and timely notice that includes information about the cause, the anticipated length, and what actions we are taking to address the odors.